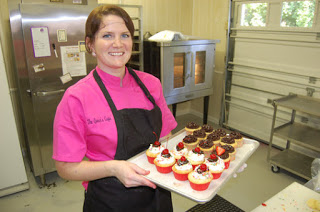 Uncategorized
October 10, 2012June 7, 2016 Nick D'Andrea 0 Comments
This past weekend I had the privilege of going to new a shop that
opened in Millbury.  You wouldn’t think it was such a big thing, but for
me it was very fulfilling and a very proud moment as well.  What
was in this store, cupcakes.  That wasn’t even what made it great for me,
even though I do have one of the biggest sweet tooth’s known to mankind.
It was the accomplishment of the owner that has me beaming.
I used to be a
youth worker for a community center in Worcester in which I will not name.
I used to have a t-shirt that read “Youth work:  The relentless
pursuit of the positive”.  That is what I strove for in working with
youth.  Not so much that I wanted them to behave well for me and
accomplish the task that I gave them for the day, but to succeed long after I
had interacted with them.  There have been a lot of hits, even having been out of that profession for thirteen years.  I have seen kids go on and do
well in school, go off to college and come back successful.  I have seen
kids go on the opposite path and wind up in jail.  This year alone I had
seen one of the kids I used to work with murdered, and I saw one play in the
MLB All-Star game.  It’s like a box of chocolates, you never know what you
are going to get.
But my visit to
this new store made me so happy, not because of the absolutely ridiculous
tasting cupcakes that are made, but the owner was one of the kids that had come
before me when she was really young.  Her name is Renee King and she is
the owner of “The Queen’s Cups” on Millbury Ave. in Millbury.  I
have been close to Renee’s family for the better part of 20 years.  I used
to work with her mother at the community center and I had also worked with her
two older brothers.  Renee, used to be afraid of me for some reason. She
would get all shy and quiet and would never talk to me.  When Renee was
about 6 years old, her family moved to Millbury, but I stayed in touch with the
family after they moved.  I have always looked out for them, even though
they have never needed my help, and they have done the same for me.
Renee is a very
strong young woman and I am very happy to know her.  She definitely takes
on a lot and is always in “pursuit of the positive” , not just with
children, with anyone and anything.  We coached basketball together a few
years ago and she tried to turn every negative that came at her into a
positive.  So it did not surprise me when I found out that she worked with
children in the same capacity that I and her mother did.  What did
surprise me was this unbelievable talent that she has for baking cupcakes.
In my eyes it came out of nowhere but in hindsight nothing that Renee
does should ever surprise me.
So if you are
looking for a sweet treat or are looking for the right dessert for a party I
suggest that you head down to The Queens Cups, 238 Millbury Ave, in Millbury.
You will not be disappointed, you may even ask for more.  Tell Renee
that Nick D. sent you, and that he could not be more proud of her.
By the way, go for
the Reese’s Overload…it’s heavenly.
3D
If you don’t take
it from me, ask my wife.