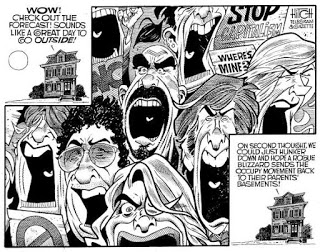 This has been a long week.
My brackets are busted, I have been trying to figure out my land
re-assessment, or lack thereof and now I have a meathead neighbor who thinks he
is a tough guy and owns the neighborhood.  And the Occupiers are back, really this is just a spring/summer protest? Yeah, a week in the life of 3D 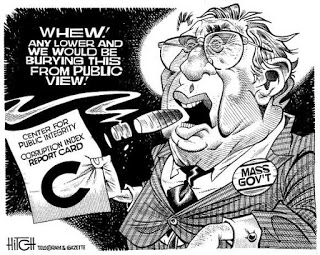 Massachusetts
Political Corruption – Massachusetts just recently received a “C” from the
Center for Public Corruption.  It ranked
10th in the country.  I have
no idea what goes into coming up with these laws but New Jersey was ranked 1st
in the country.   The corruption in this
state is so bad that Se. Scott Brown recently joked about House Speaker DiLeo
not feeling comfortable being speaker until he hears the words “You have the
right to remain silent”
Tim Murray’s new
career – I have to admit that I chuckled when I recently saw Tim Murray
show up at a St. Patrick’s Day breakfast wearing a NASCAR outfit.  It shows some humility but it doesn’t hide
the fact that there is still something missing from this story.  Maybe one day it will come out, but hey we
are the 10th least state susceptible to corruption, so I am guessing
the truth will not come out.
TSA – Another black
eye for airport security.  A video was
recently released showing a TSA agent patting down a 3 year old boy……..in a
wheelchair.  I’m all for heightened security
and making our skies safer but one thing I have noticed the many times I have
flown and have been “randomly” selected (each time).  There is no common sense with these agents
and with as little common sense they do have they do feel they are smarter than
you.  Like the lady in San Francisco who
held the security line for 10 minutes because she couldn’t identify a wine
glass in one of my carry-ons.  Or the
agent in Philadelphia who made me go back through the line because she forgot
to tell me to take my flip flops off.
Had I not been waiting for the 6 TSA agents to determine what to do with
a candle I would have been let loose in the Philly airport.  Common Sense people, that’s all we ask.
Double Your Pleasure
– A house in Clinton was hit by a car twice over St. Patrick’s Day weekend by
drunk drivers.  Luckily nobody was hurt
or displaced.  I guess there really isn’t
anything else to do in Clinton.
BU – In “the
Social Network” Mark Zuckerberg took a shot at Boston University because he
felt they were not intellectually up to par with Harvard.  Well, now he has a new reason to take shots
at them.  The recent stories of Hazing
and sexual assault by BU students makes people consider what is going on at
that school.  Every time I hear a story
of binge drinking, hazing or sexual misconduct at a Boston school, it’s always
BU.  It’s time the administration take
control of their students and rebuild the reputation of that fine institution.
“Mind if we dance
with your date” – That will be the common question asked to Mike Stone of
Minnesota.  All the girls at his high school
either rejecting his request to go to prom or already had dates.  So Stone took to Twitter and asked his
favorite porn stars to go to the prom.
He finally got a positive response and is now raising money to pay for
the flight for his date.  Mom and Dad
must be so proud!  The adult film star,
who is 19, said that she wanted to go because she was not able to go to
hers.  That’s maybe because she was
expelled for sleeping with a teacher, just speculating.
Class Action? – I
can’t believe that this happened at a law office.  Employees at a Florida law firm were all
fired because they all wore orange shirts to work on pay day.  The management of the firm claimed that the
employees were staging some form of protest against the firm.  The employees claimed that they wear orange
on pay days because they all go out for drinks and wanted to look like a group.  I guess somewhere in the middle of this is the
truth.  I find it hard to believe that a
law firm would act so irrationally.  But
then again it is Florida and I have seen crazier things.
New Tax – A Baltimore
school teacher is under fire because she is accused of shaking kids down for
their lunch money.  She also had a swear
or “act-up” jar, the students would need to pay a quarter every time they acted
up.  Well, I guess that’s one way to make
up for budget shortfalls.  You just can’t
make this stuff up. 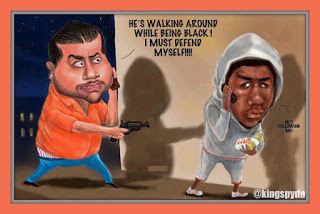 Trayvon Martin –
This story disgusts me.  The fact that
this man George Zimmerman is not behind bars, or not even in custody is the
actual crime.  The police hiding behind a
law that is stupid in the first place.  I
am not going to come out and say that this shooting was racially motivated, I
don’t know enough about it.  But the more
I hear about it, the more inclined I am to think it was. If the roles were
reversed Martin would  be in jail.  The “Stand your Ground” law should be used at
trial and not during the investigation.
Let a jury of Zimmerman’s peers determine if he was acting in self-defense.
Bounty-gate – The
NFL came down hard on the New Orleans Saints this week and deservedly so.  Maybe now the public will leave the Patriots
alone as this pales in comparison.  The
fact that you need to motivate a professional athlete even more by paying him
extra on top of his millions of dollars to hurt someone is mind boggling to me.  Just saying.
No Justice? –
This one ranks up there with OJ.  The
acquittal yesterday of the men accused of murdering 4 people, one was a 2 year
old boy in Mattapan 2 years ago just shows how unfair the justice system is.  The families still have no closure, and the
man who potentially shot these people were set free and cannot be tried
again.  Did the DA’s office move this to
trial to quickly?  It remains to be
seen.  However, my thoughts are with the
families of the deceased.
3D
Coming Right Atcha