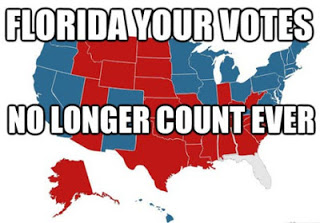 I am going to assume that most of you are like me and are ecstatic
that the Presidential Election is over.  I had written an article a couple
months back on how the election process has been ruined for me, because it had
become too darn personal.  I will admit that the two guys I supported
(Romney and Brown) did not win, but two of the three ballot questions went the
way I voted.  Was I bitter that President Obama won re-election? Nope.
Will I respect him as Commander-in-Chief? Yep.  Will I voice my
displeasure’s with him or Senator-Prof. Warren if I feel they have made a
mistake, ABSOLUTELY!  But this is not what this article is about.

Last Thursday
during lunch I had turned on the news, I think it was CNN, and there was the
story of how Florida had still not completed their counting.  For some
reason that story just set me off, and I can’t even explain why, but I will
try.  The fact that Florida is once again a story at election time
absolutely aggravates me. For twelve years there have been issues with this
state come election time, and it does not look like it is going to get better.
We only know of twelve years of issues because that is when it finally
became a national issue.  Seriously, what in the world is going on down
there?  Why can’t they get it right?  There are a lot of factors that
are being blamed for it this time around and I say they are all hogwash.
There is no reason for it other than incompetence.

People blame that
the ballot was too long.  Well boo-hoo.  Ballot measures and other
elections are going on at that same time and if you didn’t know that, that’s
your fault.  If you only went to vote for President then to be honest you
shouldn’t be voting anyway.  I was able to pull up the ballot on-line and
look at and I am assuming your state department sent out mailers with what was
on the ballot, and possibly what it looked like.  It wasn’t too long, you
just didn’t care about the other voting measures.

People said the
ballot was too confusing.  This one may have some legs but it’s not an
excuse.  I am in the camp of if you can’t read English you shouldn’t be
voting, but I was swayed when I talked to my mom (An Italian Immigrant like
myself), and she said that she didn’t vote on the ballot questions because when
reading English she sometimes mixes up the words and she didn’t want to vote
against what she truly believed in.  But at least she tried.  But
that is a different argument for a different day.  The Florida ballot had
three languages, English, Spanish and French Creole’. So this goes back to my
previous point, if you really care about the elections you would have found a
way to get informed on the ballot.

Lastly, was the
early voting was too short, what???  I’m sorry that Election DAY is an
inconvenience for you but you had an additional eight days prior to the election to
vote, that’s not enough???  I but if there was a 75% sale at Target those
people would have made time in their day to get to it, or if the iPhone 14 was
going on sale that day there would be no issues.  Are you kidding me, too
short??? There is no Federal Law determining that Election Day has to be the
first Tuesday after the First Monday in November.  In 1845, it was
established to aid farmers and church goers and to avoid winter weather.
Now, early voting back then made sense because it would normally take a day for voters to get to the polls, but to say that you don’t
have enough time eight days out is just lazy.

So now comes the
real issue, why does counting take so long?  If it’s such an issue then
they need to start planning now for 2016 on how to be more efficient in their
counting.  Even the Supreme Court, in Gore v. Bush in 2000 did not have
faith in their counting abilities.  The decision, which there were two of,
and is usually misrepresented, stated that Florida should be able to continue
the recount.  But the decision in which ended the election was that had to
have it done by the deadline (essentially the next day).  All that
decision said was “Sorry Florida, you ran out of time”.
If any of you
follow me on social media you may have seen me pop a brain vessel last week
over this subject.  My true aggravation about this is really that the
debacle in 2000 is true reason for the division in the United States.  It
wasn’t Pres. Bush, it wasn’t Pres. Obama and it wasn’t the Democrats or
Republicans, they just added fuel to the fire.  It was the recount in
Florida.  Thankfully this time, the results did not factor in the
decision.  Florida, get cracking, you have four years to try to get it right.
3D
If you don’t take
it from me, ask my wife.